An Esoteric Examination of the Great Flood

God’s understanding is far above our own. So, many of his ways are relayed through parables before they enact in astonishing displays. The flood of Noah was first of many astonishments, but many do not know that it began as a parable or prophecy before Adam’s arrival. Now, why would God essentially premeditate the extinction of his own creation? Well, as previously stated, his ways are far above our own. However, a proper dissection will increase understanding of the flood’s significance as we humbly accept that we are mere pawns within his grand scheme.

From this (highlighted portion), it is apparent that rain was in God’s forecast, but only after Adam had tilled the ground. The word till means to prepare, just as a farmer prepares soil to receive seed ahead of the rainy season. Here, Adam is the farmer, the soil is the earth, and the seeds are his children. The word till interchanges with the word cultivate in later translations. The two are virtually the same, yet the latter allows for greater examination. Cult is rooted in the word [cultivate], and it essentially means influence. For this reason, it is also rooted in the word culture. The first culture known to man was agriculture: The farming of crops and rearing of livestock for health, nourishment, and clothing. And, by no surprise, Adam’s eldest, Cain, farmed crops, while his second eldest, Abel, reared livestock.

Cain murdered Abel, which caused God to mark and banish him to the land of Nod. Corruption followed soon after, which incited the great flood. The word Nod comes from the Hebrew term nowd, which means to wander. Moreover, it gave birth to the English term, nod, as in, “nod off to sleep”. From this we can understand that the affairs of men are as seasons to God. Adam was the autumn; the fall of humanity. Cain was the winter, as everything wanders off to sleep – or goes dormant – during this time. And then, the rainy season ushers in the spring, which was the great flood ushering in Noah’s lineage. 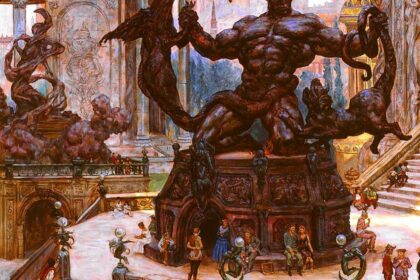